Only half of pre-school children being read to daily, UK study finds

This article makes interesting reading when we know that 40 per cent of Level 2 NCEA graduates do not have the literacy or numeracy skills to cope in the workforce. 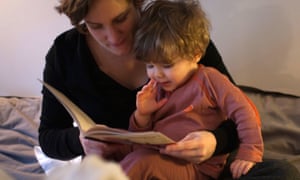 The proportion of toddlers being read to every day has dropped by a fifth over the last five years, according to research warning that the decline is a significant threat to child development.

The annual Understanding the Children’s Book Consumer survey from Nielsen Book Research, interviewed 1,596 parents of 0 to 13-year-olds, and 417 14 to 17-year-olds in the UK last autumn. It found that while 69% of preschool children were read to daily in 2013, that figure had dropped to just 51%.

As for why they were not reading to their children, 19% of parents of three to four-year-olds said “the struggle to find energy at the end of the day” was a factor, while 16% cited “the child’s preference to do other things”.

The publisher Egmont, which co-funded the research, said the decline correlated with an increase of almost a fifth in the proportion of toddlers watching online video content daily, and warned that the “steep decline” in reading to young children “signalled a significant threat to child development, with potential long-term social impact”.

“It’s no surprise that parents of toddlers are exhausted – the pressure on families is enormous, especially as parents struggle to balance returning to work and meaningful time at home. However, at such a crucial time in a child’s development, it’s essential that parents understand the enormous benefits that reading for pleasure will bring both them and their child, both in terms of attainment and enjoyment,” said Alison David, Egmont’s consumer insight director.

According to the research, which Egmont presented at a publishing conference on Wednesday, 21% of parents of three to four-year-olds “don’t feel comfortable in bookshops”, and 46% are “overwhelmed by the choice of children’s books”. Conversely, 61% of parents were concerned about how much time their children spent in front of a screen.

“We know that parents are increasingly concerned about screen time, especially the popularity of YouTube among young children,” said David. “Our research tells us we need to give children a real range of print alternatives to choose from, whether that’s a magazine, a graphic novel, a comic or a picture book. A sense of agency, and being given the freedom to pick their own reading material, is far more effective in creating lifelong readers than a strict reading list.”

Egmont has worked with WH Smith on the Reading Magic project, a piece of research that studied 12 families with children aged three to four years old, all of whom “felt reading to be a task – something to fit in as best they can”. Running from October to December 2017, the project set out to test the hypothesis that parents would read more to their children and buy more books if given help. After supplying the families with regular books by post, and inviting them to a weekly storytelling session at WH Smith, the researchers found that “attitudes had changed”.

My life as a bookworm: what children can teach us about how to read

“Parents admitted at the final interviews that reading had been thought of as a chore before, and now it was something they took pleasure in planning in order to spend quality time with their children. Behaviour had changed, too. All families were now reading to their child at least once a day,” said Egmont. “Some of the dads started reading to their children because they had either been to story time and seen its impact on their child or observed their child’s new interest in books at home. Books were considered an alternative to digital devices as mums opted for stories over screen time.”

Egmont warned in its report, Creating Readers for the Future, that “reading for pleasure is threatened … Many children are not given books and magazines, and of those adults that do buy them for children, the majority buy just one magazine a year and between one and five books a year for children,” it said.

The publisher added that its Reading Magic project, as well as another piece of research it carried out with the bookseller Foyles into developing a reading culture among primary school children, showed that “if parents can be encouraged to read to their children, children will read for themselves”.

“We need to change the culture of reading and look at why parents aren’t reading to their children. We must all act collectively – these statistics show that children’s development is at stake,” it said.